Buttock Augmentation– the butt of jokes.

This post I write as its something that really really bothers me as professional. I am speaking from my heart and trying to be as objective as a reputable surgeon with many many years of experience.

In recent years like the last 3 I have seen Youtube after Youtube video surface about the procedures if you can call them procedures done by people ( many not even doctors)  resulted in deforming  people who have a strong desire to improve the appearance of their buttock. Yes exercise is best,  but to some of these individuals both female and male there simply are not enough exercises or techniques to make a buttock genetically destined to be small that much larger or shapely.

Most people don’t understand I know

Its so easy for the critics to say –oh buttocks can be controlled with squats or who cares? Yet having experience with these patients for over 20 years I can tell you that its not that easy. These individuals are driven to obtain what they perceive as good derriere and its important to them no matter what others think. They will go to all effort to obtain this and you will not be able to stop or fix that desire. Sorry but I know these patients.

Money corrupts and the predators come out

This is exactly why the vultures and frankly greedy evil people come out of their predator’s den to take advantage of these individuals and prey on their desire to improve the rear end. Thus you see these procedures done by God knows who,  in hotel rooms and dark corners of the earth, injecting God knows what into these victims. I know I speak harshly,  but I feel strongly as I have watched a pretty successful operation when done correctly  been turned into a circus side show by these unqualified,  if not criminal people to their victims. For one reason and one reason only -money.

You pay for quality in workmanship

I am not an altruistic soul, although I have done many charity cases for years, where I have not charged for my services. So I believe a surgeon should be paid for his talents and expertise. Yet no one should be paid for what disasters I have seen on Youtube and in fact in some cases should be prosecuted for assault. That is not too strong of a view.

I am not talking about the cases where a legitimate plastic surgeon has had a bad outcome such as an infection or other “normal” complication such as asymmetry or such. There is no such thing as a perfect complication free surgery, doubt there ever will be. I am talking about such things as severe scar and deformity seen or floppy implants done by whomever where the result is entirely the result of poor technique and in most cases doing things like injecting liquid silicone into someones butt. Thats crazy and is well known to be a disaster ! I mean these people doing these things in many cases are not even licensed to practice medicine must less qualified as a plastic surgeon.

Yet for the few of us who have substantial actual experience and are fully qualified plastic surgeons these disasters paint anything to do with this procedure questionable. Its a sad state as the public in general does not know and simply think its a bad procedure. This is what I mean by ” a good operation with a bad reputation” . When performed by someone who knows what they are doing, it is a good operation for the most part, though more complex than what surgeries most plastic surgeons perform. In some ways it has less complications than the widely accepted breast augmentation. The difference is people do not go to hotel rooms for breast augmentation or some back alley yet for reasons that mystify me,  they will for buttock augmentation.

Thus ends my rant about that aspect. It truly upsets me to hear these horror stories or see them on Youtube.

There are only two ways to surgically enhance a buttock.

A. Fat transfer from one part of the body to the buttock. This is by liposuction then the fat processed then injected through a cannula to the area to shape and increase volume. Typically this may require more than one treatment. Yet some of the fat remains permanently.

B. Use of a silicone implant, not the liquid but solid implants approved in the USA.  This should never be done under the skin as skin is not strong enough to support the implant. Its should be done within the gluteus or under the gluteus muscle for covering the implant and making it appear smooth and natural, One has to know exactly how to do that and frankly even most plastic surgeons do not do the procedure , as they simply do not have the experience nor are schooled in the correct technique– good they should not.

Brief History of the procedure of buttock augmentation in the USA

When I started doing this procedure over 18 years ago I guess , not sure maybe  20 ? I learned on my own with just some advice of the of the few people in the world who were doing this regularly. There were only few in the USA. Now many elsewhere in the world.

That is factual, there simply were not that many plastic surgeons who knew how do to do this. We originally did this procedure above the muscle and after one case , I decided never again to do it above the muscle , as the results were not great, not a disaster,  but not what I wanted to see. So I tried to place the implant under the muscle (over simplified for clarity) and it worked marvelously. It was a trial and it turned out quite well. Looked great and though it was not a fast recovery I was happy and the patient was very happy. 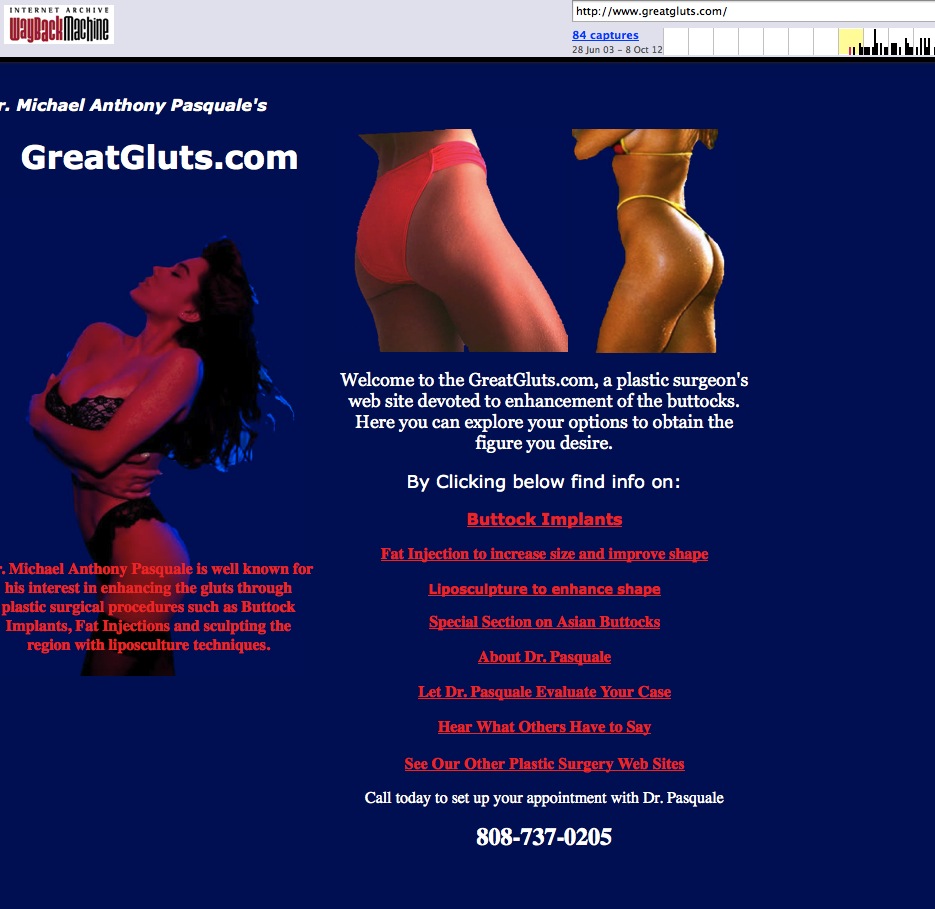 I decided to build a web site called www.greatgluts.com about buttock augmentation when google was first starting , one can find that in the internet archives today. The attention I received was remarkable people were calling me from all over the country, thus the number of cases I was doing increased phenomenally and so did my experience. I then perfected my technique, I was not doing thousands as this was not as popular a procedure like breast augmentation,  yet I was doing hundreds over a period of a few years. Then the Buttock augmentation craze hit with everyone wanting a Jennifer Lopez butt. Next thing I know is everyone and their brother qualified or not,  was declaring themselves a buttock augmentation expert in the internet. This included plastic and cosmetic surgeons as well as unqualified people.

So when these “everyone and their brother” had poor results and now we include the people who in recent years were injecting substances and they are not even doctors , buttock augmentation has a bad reputation when these horrid deformities are shown in Youtube. Its sad as this is far from the reality of the what results to expect. That is if the surgeon knows what they are doing.  By no means have a I said its perfect operation and that  I have never had one of my patients with a unhappy outcome . I have , as I have as with any surgery such as breast implants, but I can say that the vast majority have been happy and had good results and its a shame so many now are discouraged from considering this procedure. Its not for everyone,  but it has changed a lot of people lives  for the better as done by plastic surgeons who know what they are doing.

If you want to know more , see photos, and speak with real patient who have had the procedure by me, give my office a call. Also if you were a victim of these predators have a deformity or some disaster contact us, I will see what can be done at a cost that is reasonable as my heart really goes out to you. I may not be able to help you but I will tell you the truth and my honest and experienced opinion.

check our most recent review

Dr. Michael Anthony Pasquale is one of Hawaii's top cosmetic plastic surgeons. Frequently an author of web information on plastic surgery, web development.
View all posts by Michael Pasquale →
This entry was posted in Misc.. Bookmark the permalink.
Logging In...