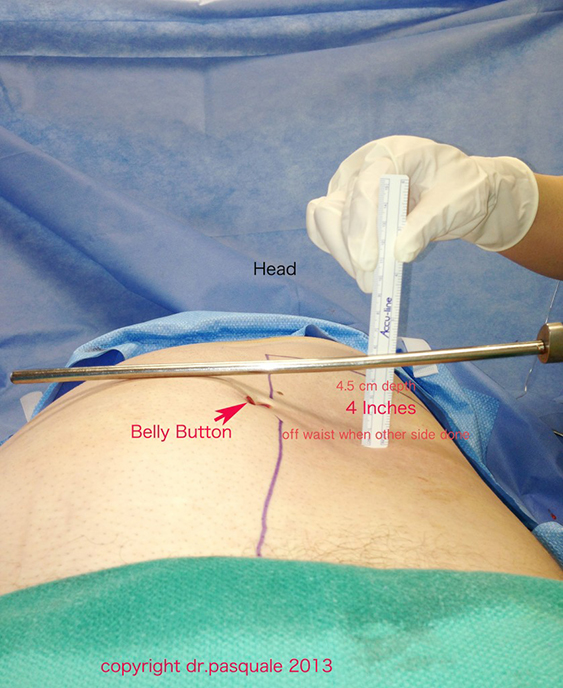 Last week I received a call from an associated press reporter,  Julie Watson  inquiring about Liposuction for the military to meet the guidelines and the Tape Test. Apparently she had found my web site www.militaryplasticsurgery.com and found the information useful. This has happened before with another reporter working for Diane Sawyer I believe,  who unfortunately had an accident before the story was aired. She recovered thank God but recognized early the magnitude of this story. Her name was Libby, and used to be my Facebook friend,  but I cannot recall her last name– very nice lady.

So today I was surprised to come in my office and have a stack of messages from reporters around the globe who wanted to interview me. Some were from London Times, Los Angeles papers and interesting enough one from Al Jazera, (which apparently my staff wrote the wrong phone number down). So I hope they don’t think I was snubbing them,  since I could not call them back with the wrong number. Muslims and Middle Easterners need liposuction as well so I considered it a compliment to receive a call from the middle east most famous CNN type network. Anyway who does not love attention and a chance to tell people what you can do? This was great. I try to be humble but I must say  “YAY !”. 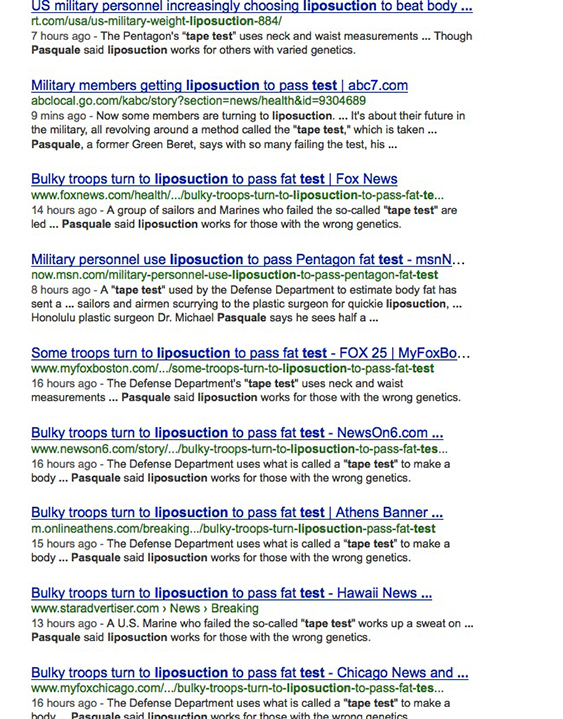 So if you type “Pasquale Liposuction” in the Google search box at least while this is being written what you will see is about 7 pages of Google search results with my name and the word liposuction appearing in over 200 articles in various publications from Fox News to the Washington Post.

What stirred up this issue is apparently a lot of people have mixed feelings about Liposuction to pass a military standards test. Some think its cheating , even one reporter from ABC asked me that. Others think its career saving and needs to be paid for by the military. Some think the military is cruel to enforce standards and others think the tape test is simply not good enough and be thrown out. My point is the reason it made big news is for one is fed through the wire service and second its controversial and gets people interested.

The reality strikes –it removes inches !

Aside from the controversy and great moral issues involved that would challenge any bioethist or Philosopher from Plato to Hippocrates as I said in my quote:

“Its just liposuction for gods sake “.

That is what it is. A person comes in and has to be 2 inches smaller around the waist to pass the tape test. We suck out the fat and they are 2 inches smaller around the waist for example. Low risk procedure, does not change their life except maybe get them past the tape the test and it will not allow a Private in the Army to be promoted to a General the next day after liposuction. So I really don’t understand all the hub bub about it. Its effective and I just do my job trying not to get into all the controversy.

Those who think its the devils tool and cheating–dont do it. Those who need the extra help then do it. Pretty simple.

3. It does work and poses little risk.

4. I have seen an increase in military patients coming in for this in the last two years due           to the tightening of the standards due to military cutbacks and down sizing somewhat.

Those are the facts , other than  that society and the military will make its own decisions about this. My only suggestion and I believe that some of the services like the Air force if an airman fails the tape test and looks in shape,  they send him/her to the medical board for individual assessment. That’s a great idea and one that they used to do I believe when I was in the military in all branches.

I am not against the military tape test as screening tool at all , as it does apply to most people its the ones who do not fit nicely in the Bell curve which do get hurt perhaps.

Dr. Michael Anthony Pasquale is one of Hawaii's top cosmetic plastic surgeons. Frequently an author of web information on plastic surgery, web development.
View all posts by Michael Pasquale →
This entry was posted in Author Dr. Pasquale, Liposuction. Bookmark the permalink.
Logging In...