Posted on October 7, 2009 by Michael Pasquale

Well ……I am sorry my dear and loyal readers I did not keep my blog up during my travels,  as time was so limited. So, I will briefly go over things here to catch my millions of readers up  (I think I have only  two readers ). I will probably have less readers after this post.

First as previously stated, I was going to Amsterdam which is one of my favorite haunts. The reasons are many. First are the people , I love the dutch as they are always friendly like the Thai people. They are straight forward and get along well. The other Europeans are so…. shall I say snobby (over nothing)  that I dont care for them as a whole. Of course many are quite nice and good descent people , but the Dutch it seems as whole are the way I like people.  Lets take the Swiss in Geneva which are a French speaking people. Some are very friendly,  but overall I would rate that town as a small town with small minded people pretending to be important. If it were not for the bankers hiding the worlds money the place would be just another dying European city in my view. No new life. As the first President Bush would say “old Europe”. They tell me that you have to live there to appreciate Geneva and perhaps,  as I only visited but…..not my cup of tea.  That is my simple minded dumb American view. In this blog I dont review the great history ( like Nazi Germans influence ?) but that’s my basic feeling.  What I do like about Geneva is the kick boxing which is why I went and I will tell you more about that later.

Well we arrive in Amsterdam and  get there at our usual time of 7 am in the morning from a flight from Seattle. We have to wait for the hotel as check in is at 11 am. This is no problem becuase we can get a great breakfast at the usual spot.  This time we also wanted to look at property for a possible retreat so we scout around. This place is easy to scout as there is one way to see Amsterdam –Bycycle. We rent a couple at 15 euros a day and start to scout around. If you go please rent a bike. 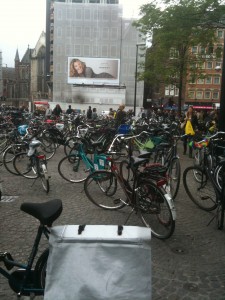 As you can see there is no shortage of bicycles in Amsterdam. In fact they number over 5 times the population but no one knows for sure. There are  so many and they are everywhere. Anyone and everyone old, young , crippled , athletic and entire families use them as their main source of transportation’s. The bike roads are great and easy to use. Don’t wast your time with any other means of transportation.

This is one thing I love about this place everything is so easy to do. No traffic jams, no crazy people or homeless that you can see in the central part of the city. Its clean, organized and easy to navigate around on foot or bike.

I like it because of the people I meet and the kick boxing. Rose likes it because of the Art and Museums and Food. There are great restaurants and since Rose is Malaysian Chinese she has a chance to get real Malaysian food and eats there almost every day. Below is a picture of that restaurant located next to the Red light District. That’s the famous place with hooker on display in the windows. Sort of a another type of take out menu. 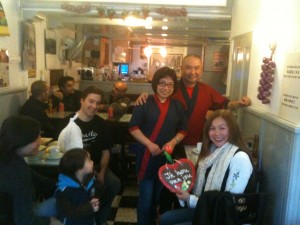 The food at the Malaysian restaurant is authentic and quite good. Here you can study Malaysian Chinese, in their natural habitat eating good Malay food. This I believe  is their normal “in the wild ” behavior to eat eat eat.  Such are the Chinese…did you know that when you go into a Chinese persons home they don’t ask how are you,  but the first thing they ask is “Did you eat yet?”. If you find a Chinese person in the wild some day just ask them.  They will tell you its true. The couple at the Top are the owners by the way- her name is “Candy and his is Buddha” , I am not kidding.

Amsterdam is famous for legal drugs ( not hard ones) and everywhere you go are the “coffee houses” where you can buy either hash or marijuana cigarettes and smoke it right there while you drink coffee. Not that I would know,  but I was able to observe this. It appeared fun and seemed harmless enough. Yet I think it must appeal to a different crowd as I am a doctor. Everyone knows doctors don’t smoke pot. In case you want to know what these places look like I have several pictures below. They tell me that its cheap to buy and is high quality. 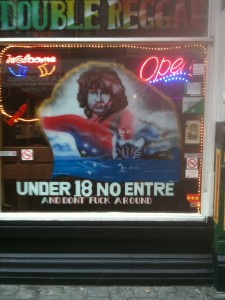 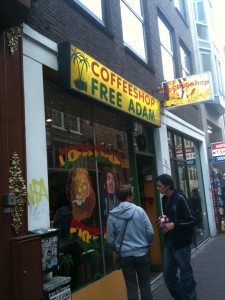 These establishments are everywhere scattered among the sex shops. I have a picture of one sex shop and of some of the evil weed that people smoke. Why people make such a big deal about a silly plant I can still cannot figure out. Its like anything else in my view–abuse it and it may cause problems. So I remind my readers that as I am a libertarian I am against government regulation of such. Amsterdam has no crime attributable to rampant drug use like we do in The States. The criminalization of this plant and other such drugs is why in my view we waste so much money. Libertarians believe if you want to kill yourself who are we to stop you, as a freedom loving bunch. We believe in a freedom to self destruct. 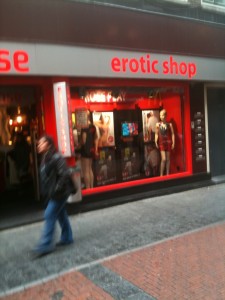 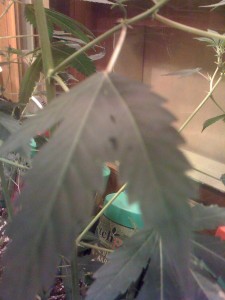 Well the above is only a very small part of Amsterdam,  there is something for everyone there. Art , Museums , food , drugs, sex, business deals, Muslim and Buddhist temples, churches and and a wide variety of everything. That sums up Amsterdam ,  which is a city of extreme diversity and more important— tolerance for diversity. I watched one night at 5 am the practicality of the place as the party goers were in one square when some drunken hell raisers started a fight. The police cleared them out in less than ten minutes with Horse Riding police they were there in seconds appearing from nowhere. They were professional,  efficient and cleared the crowd with out any evidence of brutality nor disrespect. They did their job quickly and the party on the street continued. I was impressed.

Bicycling around I looked over many properties and potential places to live. Signs were posted as shown : 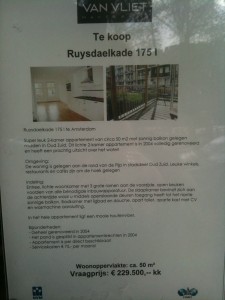 Ideally one would not need a large place,  but some place to call home in Europe so you could have a home base. A base camp if you will.

Yet there are catches in the Amsterdam’s real estate market. Interestingly, one must be careful about what are some unusual laws.

If you buy a place and leave it empty , squatters may take over and inhabit there and you may have a ridiculous time trying to get them out. They in some case have more rights then the owners who they are not paying rent too. Crazy?  Well yes, but that is Amsterdam. I never saw such a bad deal for property owners. The original idea was that the city did not want empty buildings around by absentee land holders or something like that. Well it seems to work and the properties are all well kept. Yet maybe its been taken to far. I have more research to do in these laws.

Well I went to a kick boxing place in Geneva where my old instructor from Thailand recommended as he was recruited in his younger years as a Swiss Muay Thai fighter. There he went on to be a Swiss national champion before returning to his home in Thailand where I first met him.

This gym was quite busy with over twenty fighter level members and huge intermediate level trainees in Muay Thai. They take their fighters to Thailand once a year for training. This gym is run by a Swiss fellow and his Thai wife. Very nice place I recommend to anyone. Unfortunately back in Amsterdam I could not find the Merijo Gym which is the famous gym there I trained at before a few times. This gym apparently moved location and due to time limitations I could spend too much time looking. So I trained on my own while in Amsterdam jumping rope , weights and shadow boxing and of course cycling hours a day.

That’s about it for Geneva to me that’s all the two itself offers. I did meet a few people and had brief conversations shall I say. The Swiss don’t speak much english There main languages are German and french. They also have that attitude of your stupid if you only speak french. As example I asked a cab driver to take me to the Hotel Savoy. He looked at me like I was nuts. I pronounce Savoy as most Americans would like rhymes with “JOY”. So he finally figured out what I was saying as he pronounced as Sav-0-aaa a definite french accent. But what I found most ridiculous was the scolding he gave me. “I have been driving a cab for 15 years and never once have I heard that way to say Savoy” he said in a most condescending manner. I could not help but tell him back—” I believe that you have not in your limited life experience of driving a cab in Geneva heard any other variation”  as I chuckled to myself. Score one for the American verses the Geneva Red neck cab driver with a “limited ” small mind. So it goes. I left Geneva vowing never to come back…well maybe I will for the Muay Thai.

Other than these issues of looking for property , relaxing and Muay Thai the most memorable issues was the Bicycling. I truly loved that around Amsterdam and I will do it again and again its a bike paradise. I also thought I will take a motorcycle trip around the country and maybe to others next time I go.  That will be fun. As far as business goes , well I did see some plastic surgeons in Geneva and was impressed but the Swiss are known for a long History of cosmetic plastic surgery. I also spoke with some Web Designers and found out about the local community in terms of Web design and marketing as well as in Amsterdam. There will be some of the best Internet and media conferences coming up these next few years like next fall which I will plan for.

Well my dear readers I don’t want to bore you with too much, so I will go over some other details in later blogs as I am still suffering from jet lag. As always enjoy. 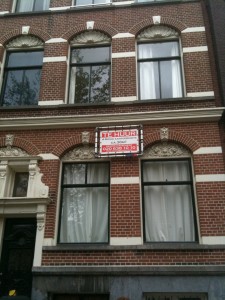 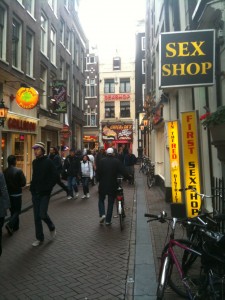 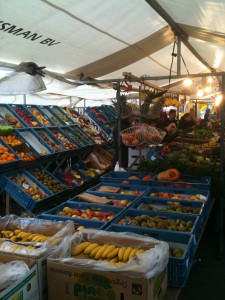 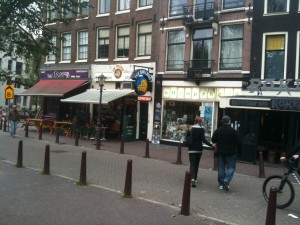